Acts of the Lords of Rannick, XXXII

Gah, I rattled this off in a hurry. Rather than explain the Plot Twist card, I’m just going to go back and fix the last post.

With Arradin and Torgor recovering in the pit after being tended to by Don, Tersplink flew up the pit shaft and alerted the rest of the group to the danger down there and that they had essentially been sprung as infiltrators.

Dagfinn and Tersplink stayed topside, in order to keep an eye out for newcomers to the fort. Corwin, Albedon and Kerplak descended. As the situation was reassessed, the priorities of the mission were discussed. Corwin argued that the retrieval of the Sandpoint captives, (about a dozen or so, as I recall) should be top priority. Arradin argued for putting an end to Galenmir, a valuable General and also someone Arradin suspected would fetch replacement guards to scour the caverns. The greater goal of defeating Mokmurian seemed like a goal for a later date as the situation had been put on the clock by Galenmir’s discovery of the party’s raid into the fortress.

It was determined, at least, that they should go and check on Conna, who had been on the receiving end of some punishment as Galenmir roused the inhabitants of the caverns and found Conna somewat wanting in her willingness to defend the complex.

Don and Corwin moved quietly along the short passage that led to the painted cave. Don also forgot to warn Corwin about the terrifying apparition that haunted the room. Corwin dropped dead of fright. Don was, presumably, so intent on starting Corwin’s heart that he neglected to tell the rest of the party that was following close behind. Albedon was rooted to the spot with fear, but, hey, at least his little dwarven heart could take it.

Once the apparition had faded, they attended to Conna, sporting a significant welt across her angular cheek and unconscious. She related that Galenmir was indeed on his way to alert the tribes up top…

… and that’s about the time they heard him coming.

Scurrying down alternate passages and backing themselves into the recesses in the painted cave, they prepared for Galenmir’s approach. Albedon cast Fog Cloud,  obscuring the passage ahead of the Stone Giant General, and when that caused him stop stop at its edge, Albedon set up a Wall of Fire in the midst of the cloud. Galenmir started backtracking, calling out to persons unknown that the intruders were near the painted cave.

Albedon dropped the Wall of Fire and Fog Cloud and at the chance, Galenmir ran through the passage and up the ramp. He stopped at the bear cave to check on his bear sentries and when he did so Arradin ran out to meet him in combat again.

Don flew up the pit shaft and began calling down elementals to aid in the fight;  an ice elemental and then a magma elemental. Galenmir dispatched them with ease, but had to spend attacks he would typically have been piling on Arradin. That’s the first law of meat/ice/magma shielding: you don’t have to be good, you just have to be there. Then Don cast Call Lightning and Flame Strike, two good druid stand-bys. These latter two started putting some damage on the General.

Arradin meanwhile, was engaging him, with the results she had predicted. He was too quick to disarm, too strong to grapple. Corwin spent some time playing catch with his spear and then leaving the spear to Kerplak, moved forward to engage in melee.

Torgor and Albedon, meanwhile, took a circuitous route to the fight. After hiding in the painted cave’s special hiding nook, Albedon Dimension Doored up to the bear-skull shrine on the surface and then ran to the edge of the pit and provided support from there. Torgor’s arrows were ineffective, but he knows where to annoy giants so that other people have an easier time hitting. I usually characterize this as him just shouting “Hit them in the balls!” But really he is preying on the target’s foibles to the betterment of his hunting companions. For example, if Stone Giants don’t like anything fluttering around their head and Torgor knows they’ll go out of their way to avoid them, he’ll send a few arrows to make them duck out of the way, causing them to drop their guard, causing everyone else to have an easier time hitting them. Shouting “Hit them in the balls!” works too though.
Albedon had more luck with Lightning Bolts and a Fireball. Galenmir was saving like a goddamn champ, but that damage started to add up.

Kerplak was also lending missile support, having offered small parts of his soul  to anything up there/down there that would help him. He sank a few bolts into the giant, but for the most part, Galenmir’s armour made him unassailable. There was also the idea with the spear, which Corwin left for Kerplak to fire from his grenade launcher. That didn’t work.

Galenmir, having backed to the mouth of the cave of dead bears struck down the ice elemental, the magma elemental, Corwin, kicking the half elf’s limp body into the bone pit and then wailed on Arradin, causing her to withdraw. The combined power of so much magic damage was weakening him though, so he probably was in no position to register surprise when flying Don decended Wild Shaped into a Mastodon on the narrow ramp and gored Galenmir with one mighty thrust of a tusk. The General was lifted off the ground by the force of the blow and slid down the curving tusk, dead. BAMF. That’s how to finish a fight. 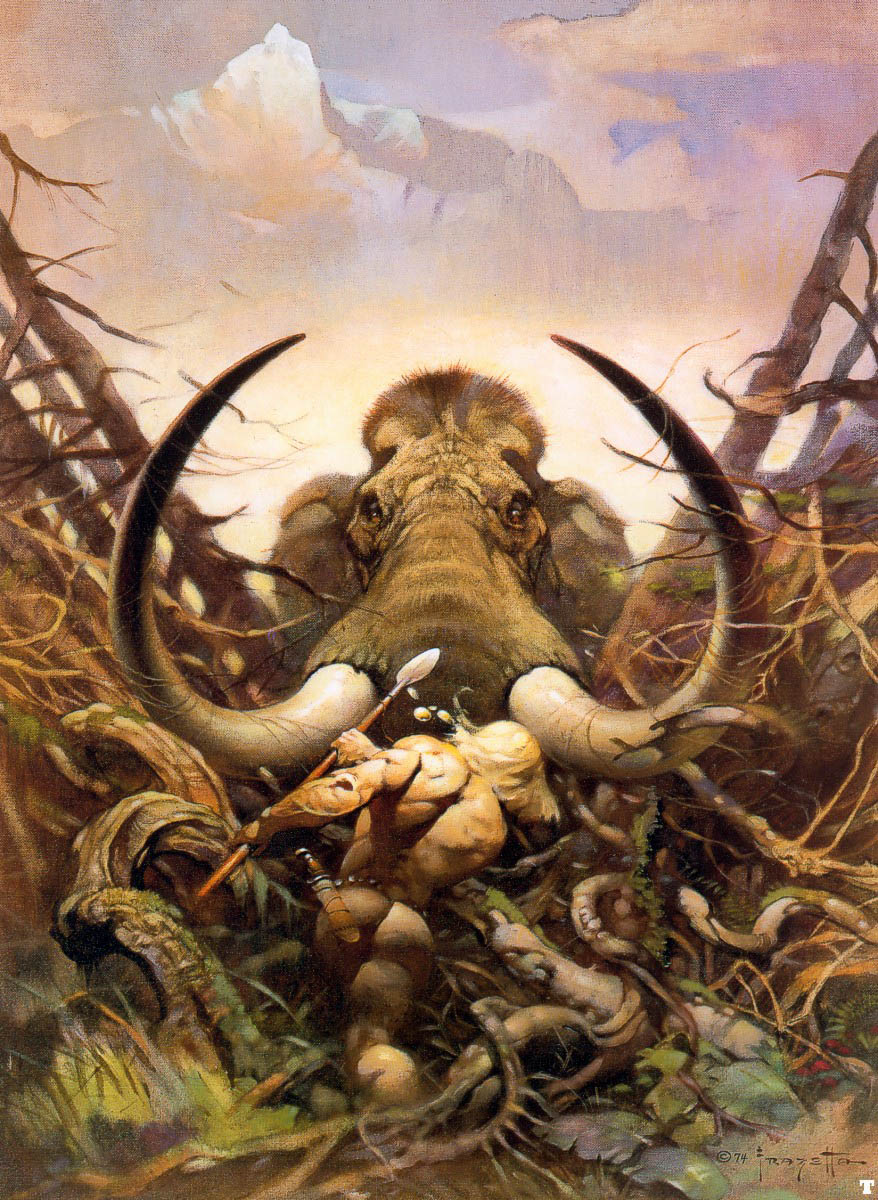 Frank Frazetta would have been proud of the Mammoth vs Giant fight above a pit of bones. He wouldn’t have understood Arradin’s armour, mind you.

Everyone knows that elephants of all kinds love parades, so MastoDon plodded up the ramp to go show the rest of the Mammoths in the stable who the new motherfucking boss was. What the other Mammoths thought of this, only time will tell. Nervous anticipation, would be the vibe they were giving off.

Of course everyone was very excited to pull Galenmir’s lovely, lovely gear off him. Excited enough that nobody bothered to go attend to the comatose Corwin for quite some time. If Corwin was the grudge holdin’ sort… you’d all better sleep light. But it is hard to be too down when Galenmir had so much good stuff. An Oil of Darkness, (causes you to believe in a thing called love and then wonder if you’re doing it ironically or not), Potion of Gaseous Form, (which was Galenmir’s next move, barring Mastodon-Impalement), a neat Light Steel Shield (no one knows what it does), some +2 Breastplate (pretty rad, Arradin ended up with that), a Cloak of Elvenkind (+5 Stealth, so it was given to Kerplak, guard your valuables) and a neat Heavy Pick that can’t possibly be bad, but no-one is sure.

Once Corwin was up and about again, they began searching the areas that they’d already been in. First up was the pit area. While they mostly found storage caves off the pit, they also examined the corpses in the bone pile. Aided by the carrion birds that feasted there, there wasn’t much left to identify the bodies: a mixture of human, ogre, giant and with a few young giants thrown in. What did unite the bodies, however, was that they were all marked by the Sihedron rune. Brands in the case of the humanoids and careful removal of scales on the dragons. Kinda big for a tramp stamp.

Corwin and Albedon found the tatty dire bear hide hanging on the wall and the door underneath it. Galenmir must have had to squat to get in here, but once inside they found the General’s lair. A fairly small cave, piled high with bearskins in the southern end but otherwise carpeted by furs and hides. Galenmir’s personal collection of trophies was collected here: the neatly bound beards of 100 dwarves and the 33 shields of warriors who had fallen to Galenmir in single combat. The names of each opponent; human, elvish, dwarven was included on a label, written in giant, cataloguing the previous owners of the shields. One in particular caught Corwin’s eye; a rather nice +1 Heavy Steel Shield of Arrow Catching that used to belong to one Anstan Jeggare. That was given to Arradin, who is starting to pile on the armour while Corwin took the large jar with a pickled Frost Giant Jarl’s head inside it. To each his own. They found his pocket money too, which while small in quantity of coins, was high in value.

Back in the Great Cave of Jorgenfist, they searched out the room where the guards had been killed and then, having been told that there was a cook, went to go find the cook.

There are several things Kerplak should never be in charge of; children, fireworks and opening diplomatic relations. While his cousin is the epitome of a charming and engaging gnome, Kerplak doesn’t have any of that. Even by gnomish standards, Kerplak is weird. So whatever calming words he said to the giant cook, who was holed up in her little kitchen, it came out as some inflammatory insult and she flew into a rage, trying to pummel Arradin and Kerplak with her enormous ladle. A single stone giant is no longer a worthy opponent for this party, however and if her end was needless, it was at least swift.

We finished up there, with the tribes of Giants and Ogres unaware of the raid occurring in their very midst, the caves of Jorgenfist alerted to the presence of the intruders but eerily silent and the level below, waiting.

The Compleat Adventurer went to Corwin, who wears unflagging determination in the face of miserable luck like a favourite cable-knit sweater on a cool September evening. I’ll always “Save room at the top for Corwin”.

As per the new rules he recieved the normal 100xp bonus and another Plot Twist card on top of the one he received for levelling. I think Corwin will do well the more his influence on the game doesn’t involve dice.