Wonder of wonders, BRose bought this. Yes, I know, it doesn’t have anything to do with Warhammer 40k. Nothing at all. Crazy, right? If I ever had to entertain children, I’d buy this game. It is surprisingly great. There is a deck of cards with a bunch of symbols on them. Each card has ONE shared symbol with any other card in the deck. Like a game of snap, you present two cards at once and the first person to spot the shared symbol wins that card.

It sounds dead easy – and it is – but you’ll stare at these cards feeling like an idiot because you can’t spot the shared symbol. Then you’ll feel the astonishing relief of not being an idiot when you spot it. As carrot and sticks go, “Do I have brain damage? I think I do… Wait no, it’s the snowman. Phew.” is a pretty good one.

Killer Bunnies is one of those games I’ve seen in games stores for years and never bothered to pick up because it is silly. I’m glad that I played it though because it really is a solid game, albeit one wrapped up in dodgy art and sillyness. I think in terms of “funny cartoon universes” in beer and pretzel games, this one kind of loses out a bit to games like Munchkin or even Illuminati. They’re cute animals, who act mean! Yeah, yeah.

That said, once you get past the design, the gameplay is really quite good. You can pick up how to play in a very short period of time and winning is never a certainty, no matter how well you seem to be doing. You have a hand and you play cards one at a time. The card you play doesn’t immediately go into action; it goes into a queue of two, so you activate a card you played two turns before. This adds a touch of the random and unplanned that I really liked.

I love Guillotine. Here is how it works: You set up the Gullotine and you lay out 12 nobles in a line beside it. Each player kills the noble closest to the Guillotine on their turn and scores the points on the card. The game part of it is that you have a hand of cards that typically mess with the order of the line; so while you might be due to execute a Martyr or a Hero of the People or a lowly Piss Boy, you can manipulate a line so that Marie Antoinette, a Bishop and a General fall to the blade on your turn. In short, you fuck over everyone else to create a pyramid of important heads. When the 12 nobs are beheaded, the first day of executions is done, then you lay out another 12 for day two and so on until there are three days worth of dead Frenchies.

Dead easy, right? The gameplay is great and the art and design is great. That Clothing Swap card cracks me up. Fortunately, this is the one game that I actually own and can play with other people. So good news, right? A game takes about 20-30 minutes. 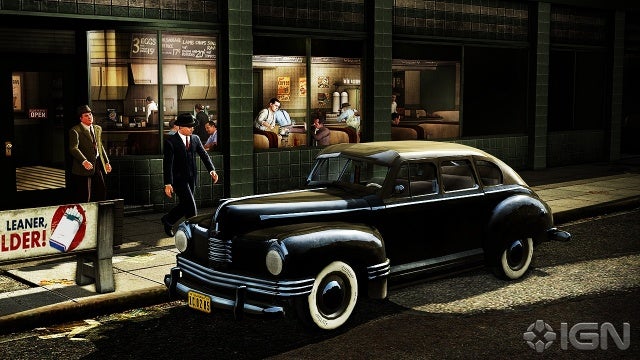 I also love LA Noire… but I’m not sure you’d like it.

I don’t know why that is. I think it is because this game is DIFFERENT with a capital IS THIS EVEN A GAME?

Mechanically, this is a modified Grand Theft Auto and we all know that this can work really well because Red Dead Redemption worked really well. This is like Grand Theft Auto with fetters on. You know what fetters are, right? Usually not a positive thing. They’ve recreated 1947 Los Angeles to an incredible degree, but they never let you play in it. While GTA is often at its best when you’re just dicking around on a crime spree; there is no chance to do that in LA Noire unless you really break out of the game’s story. Even then, as a policeman, you can’t go on a nutty crime spree.

The second thing that you would think would count against this game is that the missions happen one after the next and you can’t get out of them and you can’t really fail them. All you can do is wrap up the case in a way that is either disappointing or awesome. Someone goes to jail at the end of each case, maybe it is the right guy, maybe it isn’t, that’s up to you, hotshot.

Strike three is that you play Cole Phelps; boy scout cop. You don’t have the same latitude as you have with Niko Bellic, where you could be a whore-stomping, pedestrian slaughtering war-criminal or a girlfriend-wooing, relationship-building war-criminal. Cole’s personality is set – and interesting, but the only input you have is how good he is at his job.

There are small things that are a little weird – like introducing so many little tweaks that the game feels like a very long tutorial sometimes or that the Narrator buggers off after the first part of the game.

Still, despite all this the game is an amazing experience… for me at least. Wrapping up a case by catching the perp in a lie that you can nail them on because you’ve investigated the shit out of a crime scene is astonishingly satisfying for me. The MotionScan technology that captures actor’s faces makes this a fascinating game to just watch and more than any other game I’ve played seems like an interactive movie. There is so little hectic action in the game, you really have time to just take the whole thing in as it chugs along. MotionScan allows the interrogation Truth/Doubt/Lie game to really function on an intuitive level.  The soundtrack is good, but it is pointless to compliment the voice work, but it really isn’t voice work, it is acting. You can see and hear the actor’s… dare I say it… performance. Aaron Staton is an unfortunate lead because he is kind of stiff faced in most of the promos, but his and the other main characters put in good work.

I’m not done with the game yet, but I’m impressed and overall I’m excited: excited because I think L.A. Noire will be remembered as the first game that did that thing; whether it is the more obvious MotionScan, or the many little tweaks and mini-games added to the GTA mechanics. The idea of there one day being an RPG with such a focus on face to face interactions of characters is tantalizing. Picture Niko Bellic taking the pliers to someone’s finger nails to get them to talk or Commander Shepard topping off an epic biotics battle with an interrogation of the captured alien. That’s rad.

I think L.A. Noire is a good game, but I think what it heralds for games in the future is amazing.