The Acts of the Lords of Rannick, IV

After resolving the danger of the dam collapsing and averting an environmental catastrophe, the party settled in for the winter at Fort Rannick. Some errands were run to Magnimar, that turned  the party’s haul from the Kreeg ogres into actual currency and some Magnimarians were enticed  to apply for positions at the newly opened fort. Specialists were brought in and rebuilding the  Fort’s defenses and living areas was initiated. The grateful dispossessed of Turtleback Ferry  worked tirelessly to get the Fort back up and running before Spring. 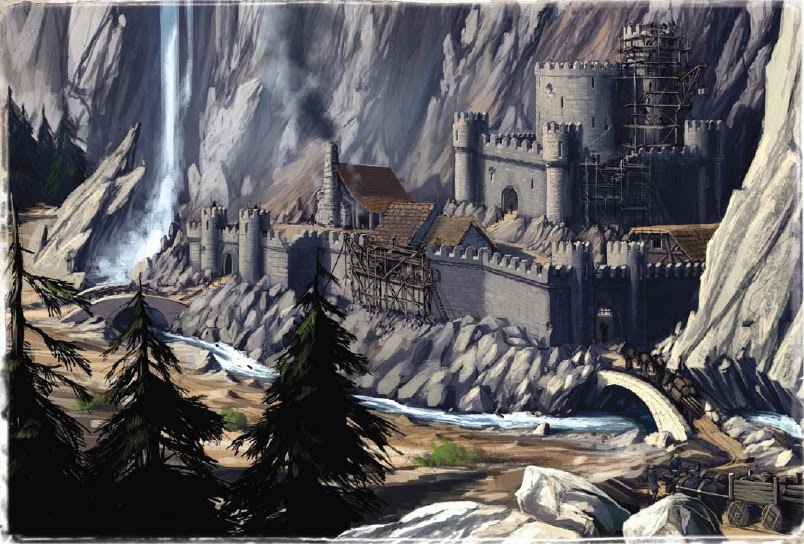 All of which business kept our heroes occupied until late in the winter; as the snow began to thaw, they were called to the Fort’s gates. There, the bemused guards had found an inconsolable pixie named Yap, who through tears and wails explained that he had come to seek the aid of his lady’s human lover, the erstwhile commander of the Black Arrows, Lamatar Bayden. Bayden had not been seen or heard of since the Ogre assault on Fort Rannick and is presumed dead. Dreadfully unhappy to hear that, Yap pleaded for aid as his queen had died, but had returned in a terrible form that was poisoning the Shimmerglens, an area of marshland next to Sanos Forest that he called home.

The party saw to their affairs and left with the Pixie leading them towards the Shimmerglens. The journey to Whitewillow was an unnerving one as an unnatural mist had descended on the area and life was slowly being choked from the marsh. Dead trees seemed to loom from the mire, the path was difficult and several unusual encounters with the contents and inhabitants of the marsh left the party a little on edge. Eventually they arrived at the heart of Whitewillow, a waterlogged clearing in the mist. Yap was too scared to continue, but Lonny, Dagfinn, Arradin and Baaz entered the clearing, with the Dropwads and Torgor watching from a safe distance.

As they watched first one, then a second, disembodied spectral arm appeared in the air in front of them and then finally the body of Myriana, ruler of the Shimmerglens. Once an incomparably beautiful nymph, her body had been cruelly savaged, her arms ripped off and fingers crushed. Her features, which had once been the subject of Lamatar’s romantic sonnets were now twisted and hateful, her eyes filled with fury and sadness. The sight of her struck Lonny, Baaz and Dagfinn blind as she blamed these mortals for the death of Lamatar and the fall of Rannick. She had attempted to rescue Lamatar as he was dragged off to the Hook Mountain stronghold, but was caught by the ogres and torn to pieces. She demanded that they bring her a piece of Lamatar’s remains. In their suddenly vulnerable state, the party seemed unnerved. Torgor and Kerplak responded by attempting to shoot the spectre; in response, she called down a pillar of fire on Kerplak who had to leap from the tree in which he hid to extinguish himself.

Arradin, Lonny and Tersplink were more conciliatory, but their overtures of peace were lost on the hate-filled haunting. Instead, it was Baaz who managed to get through to Myriana. The half-orc, perhaps more empathic to a being of deep sorrow and burning rage, caught her attention with his calm offer of assistance. Removing the blindness, the torn spectre of the nymph made Baaz swear an oath that he would return to Whitewillow with some part of Lamatar Bayden and allow Myriana to resurrect him. Baaz pledged himself to this cause and Myriana implanted in his mind a memory of the path from Whitewillow to the Hook Mountain stronghold of the Kreeg Ogres, the hidden cave system that had remained a mystery to the Black Arrows for decades.

All of which had nothing to do with Dagfinn, who was in a state of full Bard-pout because he didn’t like this situation at all. Railing against Myriana, he fanned the considerable flames of her fury until she conjured a lightning storm above his head and called the lightning down on him. Having extracted an oath from Baaz, Myriana faded from view.

Baaz, with a memory that wasn’t his lodged in his mind, led the party out of the Shimmerglens. After returning to Turtleback Ferry and Fort Rannick, the party set off to ascend Hook Mountain. While Baaz knew the path Myriana had taken, Torgor skillfully guided the party through the difficult terrain of the 10,000′ high peak without danger. Eventually they drew close to the end of the path from Myriana’s memory and as they did so they spied a cave entrance, belching a dirty black smoke…

…and that’s where we left them.

← 40k and the Tables at Tower
Does Role-playing a Space Marine seem stupid to anybody else? →

3 Comments on “The Acts of the Lords of Rannick, IV”