The Acts of the Lords of Rannick, LVI

When I came downstairs this morning, there wasn’t nearly as much Bourbon in that bottle as I thought there was going to be… so, um, bear with me here.

Tersplink rejoined the party as they discovered the body of Ordikon, the mithril mage, who had bled out in front of another type of magic pool. For anyone counting, that’s 4 magic pools discovered in Runeforge so far. The Dropwad cousins were interested in checking the pool out, Kerplak by throwing things in and Tersplink by getting close to take a sample of it. As Tersplink approached, however, the pool siphoned off part of his soul, specifically the part that does his thinking, remembering and schmoozing.

Alarmed (and in Tersplink’s case, a bit bewildered) they withdrew from the room. Kerplak caught one of the fish from the other pools and brought it to Albedon. Albedon does nothing but change fish into people these days. He changed this one into Ron Towin, a follower of Abadar who had been trapped in fish form since his expedition went badly Mouth of Winter. As the dragon tore the expedition apart, they managed to activate the portal to Runeforge and whoever could, fled. The Runeforge that Ron and his associates entered was not as it is now. Instead it was dark, the runeforge pool still and inactive, the Halls of Eager Striving yet stood. In the confusion, the survivors became separated and Ron wandered down the hallway to the Vault of Greed. Sploosh. 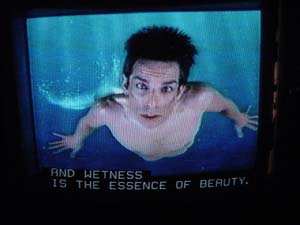 Everyone rested, Ron restoring Tersplink’s mojo. Kerplak went back to the Transmuter’s workshops and made some more stuff out of other stuff. Almost like he couldn’t help himself.

In the morning, they got themselves in marching order and explored the Hall of Eager Striving again. I’m not sure why. Anyway, Dagfinn led them in and was welcomed back by the Magic Mouth. Some arcane discussion followed, wherein they established that this was an unusual Magic Mouth.

They changed the marching order into something more trap-findy. Unfortunately, this meant Kerplak walked all by himself into the Shimmering Veils of Pride and everyone else failed their save.

What Kerplak discovered was a hallway that ended in a t-intersection. The entire hallway was made of vast mirrors which caused some degree of disorientation. Kerplak solved this by scoring the mirrors with diamonds, drawing cocks on his own reflection’s head. Wandering down the hallway, he made his way to the intersection. As he peered down to the right, he saw one of his reflections scowl back at him and step out of the mirror and a reflection of his back turn around and similarly step out of the mirror. Two mirror Kerplaks levelled their crossbows at him.

Everyone else arrived at this point, just as things got interesting. It was quickly established which Kerplak was the real Kerplak and Ron poured wine on the gnome’s head just so everyone could keep track. Kerplak responded to EvilKerplakA trying to shoot him full of bolts by firing off his prototype harness at him. The attack missed, but the grapples smashed through the mirror and dug into the wall, then the winder kicked in and wound Kerplak right next to his mirror assailant.

Dagfinn, meanwhile rounded the corner, Shout’ed EvilKerplakB then went to help Kerplak. Tersplink buffed himself and helped stun lock EvilKerplakB by catching him with Hideous Laughter while he was stunned. This allowed Ron to staff the crap out of him, shattering the mirror gnome.

EvilKerplakA was engulfed in smoke and glitter and also deafened when Kerplak pulled the panic cord on his prototype harness. Moving away from the Dagfinn/Kerplak combo, EvilKerplakA detonated his panic package too, adding more smoke and noise. Kerplak dug himself out of the wall and drew his sword, the fanged falchion, and then just stumbled around blinded in the smoke for a while. Dagfinn also had difficulty coming to blows with the mirror Kerplak, so when he encountered the two gnomes, one real, one not, he split the difference and started swinging at both of them. between this and Kerplak’s horribly vicious sword animating and ripping into the mirror version, they quickly brought it down.

When the smoke cleared the party found themselves inside another enormous cathedral like space. This one, however, had ivory tiles and soaring walls mirrored to the ceiling far above. In the center of the room was a stepped dais, on which rested a very large peacock statue. Checking out the mirrors on the far wall, Ron spotted four robed humans peering out from behind the peacock’s feathers. They emerged from either side of the dais in pairs and asked the party to keep their screaming to a minimum as they were destroyed for daring to enter the presence of “his magnificence”.

There was no time to object to these instructions before the fireballs started. Two fireballs soared in amongst the party, forcing everyone to take evasive action. Ron and Kerplak managed to do some crazy matrix-bending and got out of the way of the flame, but Tersplink and Dagfinn were caught pretty badly.  While Dagfinn and Ron converged on one pair, the four identical blonde spellcasters disappeared. Next thing you know, the air is full of Scorching Rays.

That’s how we finished off. Four identical invisible guys shooting launching heinous flame attacks at the party in a hall of mirrors.

I forgot to dish this out last night, but Dagfinn losing patience with trying to figure out which gnome was which and attacking them both with gusto made me laugh a lot. It’s easy to play Chaotic when it means you can do whatever you feel like, but it isn’t as easy to play Chaotic when what you feel like doing is kind of obviously a bad idea. Nice play Mike. Remember to get a card.

Also an honourable mention to Sean for being a champ during the mirror fight, keeping on top of his numbers and helping out.

6 Comments on “The Acts of the Lords of Rannick, LVI”