The Acts of The Lords of Rannick, LXVIII

With four people you can do a lot of bullshitting and still get quite a bit done. I’ll leave the bullshitting out, although we managed to cover everything from pit bull adoption to the rape joke controversy. It was like the Algonquin round table…

…what an awesome segue David, that was skillfully done because we are currently playing through an Algonquian myth. Ha, see what I did there? The Wendigo (or windigo or witiko or whatever you feel oppresses people the least) is a legend from our own backyard, being a legend/cautionary tale told by the Ojibwe. As we swelter through summer, it is difficult to comprehend how goddamn difficult everything must have been for the Ojibwe in the winters before we arrived here and fixed everything, with our roads and our electricity and our killing most of them.

Back when there were more mouths to feed though, the Wendigo was an evil spirit that took over the bodies of those that indulged in cannibalism. Break that taboo, even at the most extreme need in the middle of winter, and the Wendigo would come and then only human flesh would satiate your hunger. Then you’d turn into a Wendigo and so on and so on. The point is, don’t eat people, m’kay? 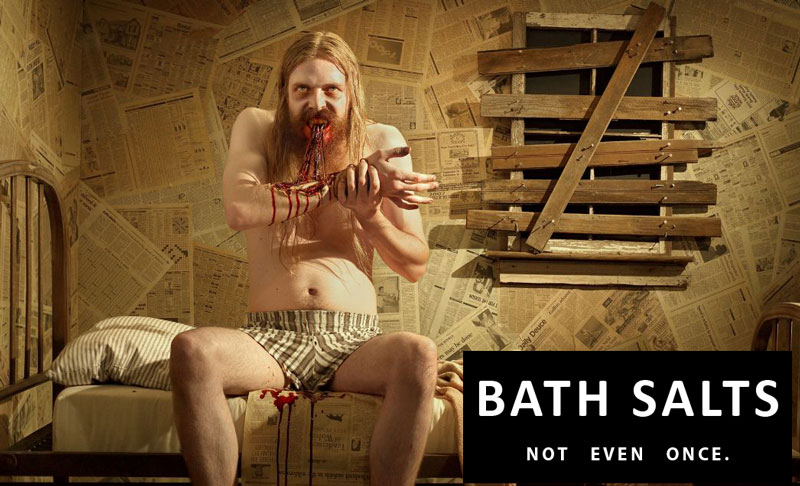 The best part about the Wendigo is that it is weird. The best monsters always are. When things are just dead or big, or strong or want to eat you… meh. But I like the monsters have some feature that make you wonder a little. The Pathfinder Bugbears are like that – they’re total dicks, because they live to cause suffering to the relatives and loved ones of their victims. Not their victims: the people who care about their victims. Bugbears get a boner for imagining all the grieving family members of the person they just killed, that’s why they keep doing it. That’s fucking weird.

Why, why would you make this? This is terrifying.

Anyway, we’ll get to the Wendigo…

High in the Kodar Mountains

So the ghost of Silas Vekker told them that the bones of his brother lay on a ledge above the last mine the Vekker brothers ever sank and that directions to that could be found in the ledger that Dagfinn had nabbed from the tiny strong room. They’d also established last session that the torn out pages at the end of the ledger were about the way to Xin-Shalast, not more mining stuff. Silas Vekker doesn’t want to hear your complications.

Ron pored over the ledger as Tersplink began the 10 minute long ritual that would create a magical shelter for them. Once inside they rested and planned their next move. The last shaft the Vekkers had dug had been about a mile straight northeast of this cabin at the foot of a 2000ft cliff.

The next day, they set off, doing some real goddamn mountaineering. Crampons and rope and pitons, the whole works. It was slow going, but they made it to the foot of the cliff. They found the pile of mine debris and the small speculative shaft that the Vekkers had put in at the base of the mine. Above them, high above, they could make out the ledge faintly – the weather had been shitty all day and the snow continued to swirl around.

At this point we decided that Dagfinn, Kerplak, Halvard and Torgor were fatigued by the climbing to get here, so they huddled in the shelter of the mine opening while everyone else who was managing to pull air in adequately continued on. They pondered climbing the cliff only as long as it took Tersplink to grant everyone Fly spells. Albedon, Arradin, Ron and Tersplink flew up the cliff face and arrived at a mist-shrouded ledge.

Tersplink twigged that this was no ordinary mist and once they’d established that they had no way of gusting it away, even if it had been a normal mist, they started searching it. Albedon’s Pseudodragon, Shortfang proved useful here because he has 60′ Blindsense and can telepathically communicate. They found, near the rising face of the mountain a series of quickly improvised dwarven grave markers, although with no matching graves. As they carried along the rock face they came across the skeletal, but well preserved remains of a dwarf in padded armour. The only damage to the corpse was that the shins were blackened, almost charred, and the feet were missing.

About this time, a Frost Worm appeared, coiling out of the mist and breathing a super-cold cone over them. 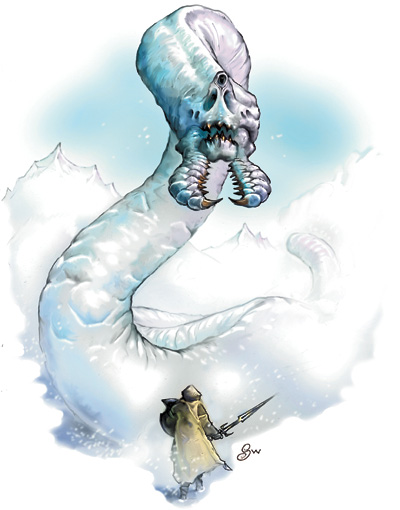 The blast hurt Ron quite a bit. Arradin moved to engage and Ron followed bravely. Tersplink moved back and Albedon got words of firey doom on the tip of his tongue. As he did so, however, a ghostly form rose from the mist and sank his teeth into Albedon, tearing at the wizard’s delicious dwarf flesh. Albedon unleashed a series of Scorching Rays, one of which was so powerful it SENT THE GHOST BACK IN TIME. At least for a while. This allowed the Frost Worm to try and bite at Arradin (without too much luck) and for Arradin to activate her Mark of Wrath, causing her Fire Shield to activate and burn the worm. She struck out at the worm and Albedon poured more Scorching Rays at it, killing the worm. When it died its great maw flopped over on its loose neck and the whole thing crystallized before it hit the ground. Albedon realised that something was about to –

The Frost Worm exploded in a shower of short-sword sized slivers of rock-hard ice. This was too much for Ron, although Albedon managed to duck pretty well. The ghost of Karivek Vekker reappeared, bent on destroying or at least snacking on the party. But that didn’t last long either and he was dissipated before too long.

The fight had fatigued Arradin but after gathering up the bones in the padded armour, they teleported back to the Vekker’s cabin. The ghost of Silas Vekker appeared to meet the bones of his brother and as he approached, the ghost of Karivek appeared again, still snarling, footless and with a needle-toothed mouth. Strands of light begain to drift between the brothers and the party could sense some sort of ghost-struggle going on as Silas silently tried to reconcile with his snarling sibling.

Also sensing that ghost-struggle and none too happy about it, the Wendigo. The blizzard ebbed and then disappeared, all the snow coalescing into a single, furious being.

Told you we’d get to the Wendigo before the end.

5 Comments on “The Acts of The Lords of Rannick, LXVIII”