The Acts of the Lords of Rannick, LXXIV

So, huddled in the ruined washhouse, they conferred with Morgiv a bit about this “prophecy” and this “Hidden Beast” and this “rescuing the Spared, ostensibly for no reward other than the love of liberty that has apparently been smouldering in their hearts this entire time”.

Halvard was keen to know exactly what kind of control was exerted upon the Spared – the Hidden Beast is controlling them it turns out, through fear and reprisals for disobediance. But it can do this because it is capital-C Controlling some of them. Morgiv confirmed that they had no idea what the Hidden Beast was and that no Spared had ever successfully sought it out without returning as a Controlled slave.

Ron, meanwhile, wanted to find out how all this fit into the bigger picture. Are they enslaved by Karzoug too? What kind of freedom will it be if they get rid of the Hidden Beast, but Karzoug returns to rule his city? Such matters were beyond Morgiv. The Spared are not fighters and are unlikely ever to become fighters as their strategy of running away and living another day has so far worked for more than three and a half million other days. They do, however know the city very well and their routes around the Hypogeum can deliver a party of travellers slowly but safely to any area of the city.

After some talk about how tracking down the Hidden Beast could be achieved (easily) it was agreed that these fine fat people should breathe the sweet air of freedom too. So Morgiv led them through the makeshift tunnels and sub-glacial cysts that made up the passages through what used to be the Slave Quarter. He took a long and circuitous route, leading them around Spared sentries and away from potential informers until he reached a tunnel that he said no Spared had returned from with their free-will intact.

Morgiv is a blubber not a fighter, so he stayed there while Kerplak and Dagfinn crept down the hallway and Ron, Albedon and Halvard followed at a distance.

Kerplak verified that the tunnel was free of traps, then turned invisible and Dagfinn was pretty sure the tunnel was safe. They came to an opening in the tunnel that led to some sort of chamber. It must have been a basement of some other building, but was now a broad opening in the subterranean warren of Spared tunnels.  It was dimly lit, with a raised dais in the middle of the room and on top of that a throne. On the throne sat a skeletal, robed figure. Skeletal is a fairly  narrow descriptor, but I feel like we adequately fleshed out (gettit?) the two ends of the skeletal spectrum last night. 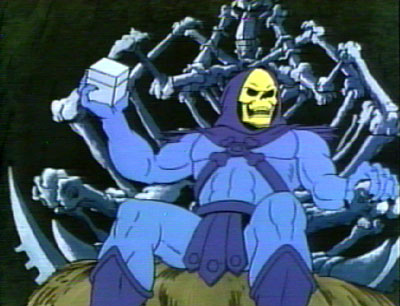 Skeletor is different. His face is skeletal, sure, but the rest of him... he takes care of himself, no doubt.

Anyway, upon Kerplak and Dagfinn’s arrival, the figure in the chair sat up out of his slouch and leaned forward. Who, it demanded, had come to offer up their blood? Invisible Kerplak waffled a bit about whether or not he was going to stand behind Dagfinn, but Dagfinn let the robed figure know that he had no intention of giving up any of his magnificent blood and began to sing a song of courage in the face of varying degrees of skeletalism.

Kerplak was faced with a hideous apparition, but wasn’t fooled by it at all. So he ignored it. Dagfinn dashed forward and thrust his Tyrannical Runesword Flametongue into the chest of the bony robe-wearer, but it was evident that this thing was just a puppet, not a being of any sort. Arrows briefly filled the air, but when that was over it transpired that the four hiding skulks (no-one had seen them and you aren’t really very likely to either when they try to hide) have fluffed every single sneak attack. They really aren’t fighters, are they?

With the four skulks revealed, the Hidden Beast revealed itself too, starting off strong with a Lightning Bolt. At that point I suppose it was just the Beast. It was a dreadful and powerful Decapus, a creature of nightmare and horror: a large floating head, surrounded by ten tentacles. It is a creature from the shadowy lands near the border of copyright infringement on Wizards of the Coast’s intellectual property: on one side, the Beholders, on the other the Vampire Decapus. Ron moved in to engage the Skulks with his shuriken (Albedon suggesting that they take prisoners) and Halvard buffed himself and then clicked the heels of his Boots of Speed together and shot into melee. Both discovered that their opponents  were undead the hard way – negative levels, a useless Harm spell and a bunch of ability damage criticals that the vampiric skulks couldn’t care less about.

The Hidden Beast went invisible again, after grappling and hurting one of Albedon’s summoned Bralani. The dwelf had called up three of them and they had rushed into the room as missile support. The other two rushed over to engage the skulks with their scimitars allowing the fourth to flee down a hallway, hide and then come back and sneak attack Kerplak.

I will resceru you, Zeruda!

Kerplak was frustrated by the lack of auto-fire on this borrowed crossbow and had to keep shooting and then reloading. But he did take out a wand of Haste and fake it out enough that he cast the spell on the entire party, although not the Bralani. He did make save against the Hidden Beasts Lightning Bolts, effortlessly wheeling away from them in the nick of time.

Albedon, directing his Bralani also buffed himself and laid down a Disintegrate on the Undecapus which would have felled many mortal heroes. The Hidden Beast was none too happy. Then sent some Scorching Rays against the Skulks who proved harder to hit. Scorching Ray is so successful against giants that I get used to it always messing stuff up, but it turns out they are pretty easy to duck if you are just a regular dude. Albedon was also faced with a terrible vision dredged from the darkest parts of his mind, but he wasn’t fooled by this trick either.

Halvard and Ron double teamed the first Skulk vampire they encountered, the one that had saddled Halvard with the two negative levels, slaying it quickly. Then he ran over to the Bralani which had been spared the worst of the vampire’s attacks thanks to its Mirror Images. Sadly, his armour seized up on him, one of the spikes caught under one of the other spikes but once he’d freed himself, he chopped the damned vampire in half at the waist. Gorum smiled on Halvard’s smiting last night.

Ron was having some terrible luck trying to land blows – almost but never quite hurting himself – but he was able to get some hits in.

Dagfinn engaged the third Skulk, who had tremendous success in seeing through the Bralani’s mirror images. Like, uncanny success at knowing which Sailor Moon to stab in the neck. It retreated down another hallway at the arrival of this terrifying bard, attempting to escape.

There we had to leave them, as a temporal disruption was imminent. Combat will resume next week.

And after we blethered for a bit – not about the greatest sports movie ever made, but about Mike not knowing that it was Rocky – I picked up all the miniatures and put them away because a Vet is going to come and terrify my cats on Friday. Then realised I hadn’t marked anyone’s position… so there really will be some kind of temporal/physical/spiritual/psychosexual disruption next week. Bah.