The Acts of The Lords of Rannick, VI

So, when last we left our heroes, they were in a frosty, mist filled cave full of three witches and a wight that they’d just killed.

The filthy cave was full of scraps, bones and body parts, but nothing of substantial value. Except, of course, the body of Lamatar Bayden. Ever-on-message Arradin pointed out that this was the reason they were here and that their goal was achieved. There were two tunnels left to explore and the party had a brief debate about whether to press on with exploration (“For treasure!” this faction exclaimed, eyes gleaming) or to flee the caves, what with them being depleted of spells and down one bard. The tactical retreat faction won out, so with Corwyn and Arradin hauling Lamatar’s frozen body between them, they left the Kreeg clanhold as quickly as possible. They didn’t even stop to mess with the big black statue on their way out.

Torgor, having been this way once, now knew the area like the back of his hand and led the party back down the mountainside. It was well after midnight when they eventually arrived back at Fort Rannick and Lonny saw Lamatar’s body laid to rest in the Black Arrows sepulchre, with Torag’s blessing. After that, everyone hit the hay for some much needed rest.

In the morning, Lonny called upon Torag again to unmake the spell that was holding Dagfinn in his toad-form. After some effort, the spell was untangled and Dagfinn was returned to his natural, handsome state. Father Ivan called in at the Fort and was interested in hearing about the raid on the Kreeg Clanhold. Lonny sensed that something else was concerning him though and pressed him on it. The priest of Erastil opened up about a small tattoo that he had first seen on several of the adults killed during the flooding of Turtleback Ferry. On further investigation, four of the six adults killed had the mark on them and when he began making discreet inquiries around the rest of the town, he eventually discovered that upwards of 400 townspeople had been admitted to the “elite members club” of Lucrecia’s gambling boat. Since that comprises the vast majority of Turtleback Ferry, the idea of a select few being given special perks seems likely to have been a scam. Father Ivan can’t figure out what the scam was though. The party recognized the tattoo as the Sihedron rune that has continued to pop up a lot since Dagfinn’s initial study into the matter: in the temple below Sandpoint; around the neck of Nualia, the Lamashtu worshipper; on the mutilated victims of the Skinsaw cult; the carved dragonbones outside the Kreeg’s lair and on the giant statue that guards its entrance. 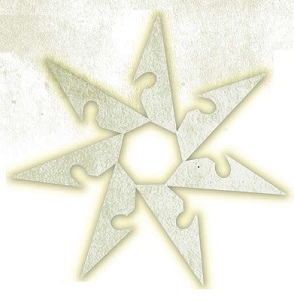 The party still had business to attend to, so they retrieved Lamatar’s body and proceeded to Whitewillow in the Shimmerglens to deliver it to Myriana. The journey was difficult, but the marsh seemed to hold fewer distractions than last time. Upon reaching Whitewillow, Myriana reformed and silently bid them to place Lamatar’s body in the center of her clearing. She cast a spell and then faded into the mist. A few minutes later, Lamatar started to show signs of life. Within half an hour he was conscious and the party supplied him with extra clothing and some wine. He had little to tell them that they didn’t already know. He seemed pleased to hear that Vale Temros and Jakardros Sovark had survived, but deeply affected by the massacre. He refused to travel to Fort Rannick and resolved to stay in Whitewillow for now.

The party left him there and returned to the Fort with the intention of venturing out the next day to Hook Mountain. Upon returning to the cave, they found that the guard had been doubled, with four ogre sentries keeping watch. In keeping with tradition, there began a half-assed charge, with some people hurting headlong towards the sentries and others keeping their distance. Say what you will, it works; in part because Tersplink called out to the dormant vegetation under the frost and forced it up to Entangle the ogres. This bought valuable time as the sentries were brought down before they could escape up the stairs.

At the head of the forge’s stairs, the party noticed that the tunnels were even smokier than before, the smoke choking the tunnels. Suspicious, the party hid back in the passageways, hoping to ambush the ogres from the forge. Scouting ahead using Invisibility, the party discovered that the Ogres were also waiting in ambush.

Dagfinn, mimicking the Ogre Overseer’s voice attempted to sow confusion amongst the Ogre ranks and Baaz ran into the thick of things, shouted something even more confusing and then ran off. The Ogres didn’t know what to think and started their own half-assed charge, with one group hesitating while their overseer urged them on and the other group charging forward while their overseer urged them to wait. Battle was joined. It was a tough fight that saw Lonny and Arradin drop, but some excellent ballistic support from Kerplak, Torgor and javelin-hurling Corwyn whittled down those who were being shocked to death by Tersplink or punched to death by Baaz. Dagfinn got Lonny back in the fight and in no time, the second shift of ogres lay strewn across the same stretch of stairs that so many of the first shift died on.

And knee deep in ogre gore, in a smoke-clogged makeshift forge, winning a war of attrition is how we left them.