The Acts of the Lords of Rannick, XCIV

When we left, we had Karzoug standing at the edge of the arrival platform above the lava/magma, with Dagfinn, Ron and Anti-Magic Fielding Halvard pressing him and most other folks rushing to get there too. 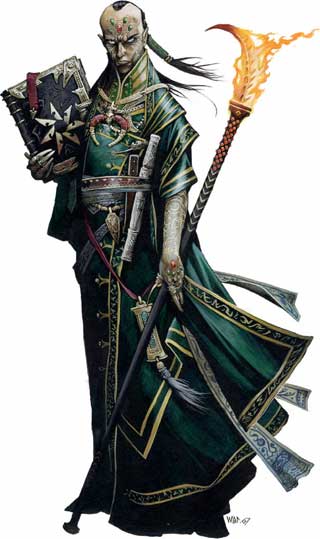 Not amused by this Anti-Magic shit.

Halvard’s Anti-magic field was a problem for Karzoug because he hadn’t put much effort in at the gym recently and was kind of hoping to obliterate people with spells. As the rest of the party converged, Karzoug stepped backwards off the platform and began to plummet towards the deadly sea of lava, away from Halvard’s field. As he did he immediately (but not so immediately that he was close to Halvard) cast Dimension Door, stepping calmly out of the other side mere inches away from Tersplink, back by his Prismatic Walled in throne area. Halvard meanwhile was caught in the dimensional ripple that had made Karzoug blink out of this plane and disappeared.
Dagfinn was momentarily convinced that the Runelord had decided to end it all, rather than face anyone as magnificent as himself. As his eyes searched the molten mass below he was convinced that the arch-mage had been consumed by the molten rock. Tersplink begged to differ – alerting everyone to the Runelord’s return and fleeing as fast as he could. The Planetar set about resurrecting Albedon and Kerplak, the Wail of the Banshee having killed them, the scrolls of Resurrection pilfered from the Lamia High Priestesses hidden stash coming in SUPER handy.
About this time, the corpses of the Rune Giant and the Blue Dragon began to glow perceptibly with a nimbus of pale green light which separated from the body and then flew directly into the green gem that hung above the Runewell. The Runewell swelled with the new soul energy that had been deposited there.
Once more the party started heading towards the Runelord with all due haste. Karzoug took the opportunity to drop the Wall of Force and raise a second Prismatic Wall, sealing himself off from everyone but Arradin who had managed to Fly back  just in time to get stuck in here with a Runelord.  There way, however one small gap where the wall crossed over the chasm that led down to the lava. If people could negotiate their way under there, they could get in. That seemed like an attractive prospect given that both Storm Giants had just tried to walk through the Prismatic Wall and been sent to another plane for their troubles. Kerplak was able to fulfill a   genetic imperative and was borne aloft by the angel for six shining seconds.
Arradin and Karzoug wasted no time in trying to murder each other. The elven gladiatrix took her Domineering Blade, imbued with the essence of Karzoug’s destruction in the Runeforge and started slashing at him. Her cuts failed to shower her with blood (Karzoug wasn’t putting out much blood, regardless of the source of damage), but wherever the Domineering blade found the Runelord, it left a glowing line, as though a light shone from inside him. I believe the look I described was that of a paper lantern… poetry, man. Although Pumpkin Lantern would have been accurate too, though less poetic.

Karzoug began lashing out with some pretty big spells. Targetting Arradin in particular, he hit her with Finger Of Death, causing 200hp of damage, enough to kill 33 first level Wizards. Arradin was nearly overwhelmed by the damage, but reeling (probably dramatically as she was still flying) she remembered something Dagfinn had once said and gritting her teeth against the pain, resolved to keep fighting until death took her. (FATE CARDS!)
The party converged, Dagfinn, Ron and Arradin at the hard face of things, Albedon and Kerplak lending missile support and Tersplink making sure he lived to buff a few more rounds from the safety of the other side of the Prismatic Wall.  Albedon managed to get off a Scorching Ray that not only pierced his Spell Resistance, but bypassed his elemental reduction, searing Karzoug pretty badly. (Wizard Fight!)
With everyone closing in, Karzoug then resorted to spells for killing lots of people all at once, two blasts of Horrid Wilting putting down Dagfinn, Albedon and Arradin. Tersplink summoned a gaggle of Bralani Azata to heal him and then sent them in to to do more healing, although half of them were slain by the second Horrid Wilting. Ayzuri (Ayruzi… I can never remember) was on heal patrol, flitting between dropped party members with her healing spells.

Dagfinn and Ron switched between offense and healing as they kept Arradin up and swinging to the best of their abilities. Dagfinn’s own Domineering weapon also leaving lambent slashes on Karzoug’s person. Karzoug took to the air as melee attacks, spells and crossbow bolts rained on him. Arradin followed him as he cured himself and unleashed more damage.
The Runelord let off a volley of Magic Missiles as he healed himself, but he couldn’t keep up with Arradin. Although he managed to dodge many of her blows, she knocked him out of his defensive posture with one sweeping blow and then drove the runeforged blade beneath his ribs.
The Runelord’s mouth opened wide, but instead of a scream, blinding bright light erupted from it. The light surged from all the slashes and cuts inflicted upon him and his body seemed to curl and crisp like burned paper. A second later, a brilliant explosion of light knocked everyone flat, searing the eyes of Albedon and Dagfinn beyond use. Other than that (which, to be fair, melted eyeballs are kind of shitty) all fatigue, injury and debility was washed from them by the light – the essence of thousands of souls suddenly released to find their way to the afterlife.
Karzoug the Claimer was no more.

His vestments of power and magical artifacts fell to the ground as the walls of the cavern/pocket dimension began to fade. Only those items, the party and the Runewell (now empty and dark) transitioned to the Pinnacle of Avarice.  Ayzuri was able to Regenerate Dagfinn and Albedon’s eyes. TRIVIA: this is the 3rd set of eyes both of them has possessed.
The party rested, the rest well deserved, above an increasingly abandoned city. The giants had fled, as had the Lamia Theocrats that lived in the middle city. It is not a safe city, not by any means, but the forces of Karzoug on Golarion scattered. Those Rune Giant legions that awaited his return on Leng will wait eternally. Perhaps even more importantly, when they transitioned back to the Pinnacle they were not met by the sight of  the Mhar Massif releasing its dreadful prisoner, the diabolical plot of the Denizens of Leng having been thwarted: The mountain prison still stands. They divided the spoils of Karzoug between themselves. Over the next few days, they picked their way through the abandoned city, filling all available pockets and bags with the riches of the lost city and they resolved to reveal. They made their way out of Xin-Shalast, resolved to keep its location hidden forever. When they reached the icy mountain fen, they were able to teleport back to Sandpoint, civilization and their future.
The effects of their return were immediately felt. Within days, news of staggering amounts of wealth being brought to Magnimar reached Korvosa. The financial brinksmanship that had been grinding Magnimar into the ground was now headed for a very different outcome and King Eodred II made swift diplomatic moves to the merchant rulers of Magnimar and ended the stand off. The maritime blockade was lifted and trading resumed tentatively at first and then with renewed vigour, Magnimar’s resolve to flourish as an free and inclusive city-state cemented.
The party had left for Xin Shalast heroes; well regarded, famed and important in their own way. But they returned as living legends, with the funds and abilities to make things happen. Few people ever understood the peril that Varisia faced or what had been done to avert that disaster. But Varisia – over the next few years – would see many changes because of their actions. The party, and the land they inhabit would never be the same after they returned from the City of Greed. Whether those changes are for the better remains to be seen.
The End.
Until I get the Epilogues written…

← The Acts of the Lords of Rannick, XCIII
Looting Karzoug →

7 Comments on “The Acts of the Lords of Rannick, XCIV”