The Acts of the Lords of Rannick, XLV

This is the WTFD&D article that had been cracking me up. Those henchmen tables are pretty funny, I’m sorely tempted to house rule introduce them. Pedro, the Domineering, yet Cowardly, Unselfish Loyal henchman rides again!

The choice magic item of this session (because there have been no drops in the past two sessions – stupid infernal outsiders!) is called a Fanged Falchion, but that’s stupid and I can’t let that kind of shit go, for some reason. It is a two-handed scimitar, whereas a Falchion is a single-handed machete. Falchion is really just a machete for people who can afford not to do something as vulgar as clear vines.

While Ben ended up with the Compleat Adventurer, it should be noted that last night Rolland pretty consistently kicked ass. Not in a way that was showy with massive exploding criticals, but just that almost everything Halvard wanted to do, he did competently. So that was nice, since normally Halvard’s dungeoneering career whiplashes from failing in battle to falling in battle. He got a Shout spell in and managed to get the last few hits in on a slippery opponent for a slick finishing move. Everything’s coming up Skyrim!

The Scribbler’s Lair under Sandpoint

Halvard, Albedon and Torgor had previously gone to cover the rear to prevent ambush while the complex was being searched. No sooner had the thick fog closed in around them and they became separated from Torgor. Walking into the large hallway when they had no intention of doing so, they realised that something was going wrong with their sense of direction. Leaving the hallway, they became separated from each other and there was a bit of ships passing in the night before they finally made it back to the temple of Lamashtu and decided to meet up with the rest of the party who were now engaged in combat with the Hounds of Lamashtu. Making their way along the passage Albedon arrived first to find the party having finished off the Hounds and being asked why they lied by the mysterious raspy voice.

Halvard arrived shortly after and Albedon posed a question to the voice, something nobody had tried before. The ensuing conversation revealed that the speaker was called He Who Writes and that he was a servant. It also revealed that he believed the party to be lying fools who had wasted his time and that he was done with them. At this, his voice became possible to pinpoint, not from all around, but back at the temple of Lamashtu. As people started heading that way he appeared at the rear, summoning a Barghest and two Hounds of Lamashtu to fight with him.

Dagfinn got a good look at their opponent; human, well built and well attired, but with an unsettling appearance. One eye was milky, the other normal (although, it should be noted, purple irised), but both possessed a nictating membrane that gave them an inhuman appearance. In addition, his unhealthy looking skin was covered in a thin film of translucent scales. His armour bore the sihedron rune prominently on the chest and in his hands he held a long, heavy curved blade, its edge wickedly serrated. 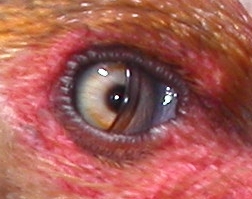 Nictating, not lactating. There was some confusion.

Everyone rushed to meet the threat. Except Tersplink who was panicked by the Hound’s baying, but under Dagfinn’s Suggestion to refrain from running. So he just stood his ground and cowered on it as hard as he could. As the Barghest and Hounds were dispatched, he withdrew and reappeared at the rear of the party, stepping out to hack at Kerplak. Catching him with one good swipe of the two-handed scimitar, the dreadful serrations came to life as they made contact with the gnome. Gnawing and churning at Kerplak, they caused an impressive spray of blood.

They made a miniature of The Scribbler, which shows his sword.

The party realigned itself to meet him again, but just as they got to grips with him, Arradin lopping his hand off, he Dimension Doored away. He appeared a little while later (with hand) and attacked at an exposed party member. And that’s how the rest of the fight went. He Who Writes drew them to him, disappeared, then popped up at the back of the party and hacked at them again. He was thwarted in killing any of them by Albedon’s judicious use of Stoneskin spells on Arradin and Halvard and Tersplink’s use of Displacement on Halvard. Tersplink also provided Haste spells and a Bull’s Strength to Halvard as the Ulfen, Arradin and Dagfinn took on the front-line fighting roles. Tersplink and Albedon were having trouble getting past HWW’s spell resistance, but the buffs and Walls of Fire were helping. Kerplak didn’t have much luck: two of his criticals were ignored due to HWW’s resistances.

Eventually, having rarely landed blows on her, He Who Writes decided to take out Arradin, catching her alone with a successful Hold Person. Stepping in to Coup De Grace her, he swung the fanged blade at her neck, churning it up pretty badly, but remarkably not killing her. A strange twist of fate that. Halvard stepped up and with two mighty swings of his greatsword, split He Who Writes almost all the way down the center.

With no one on dire hit points, there was a little bit of healing done, but mostly looting. Kerplak, ready to win at something, pounced on the curved sword.

It was identified as a Fanged Falchion, a +1 Unholy Falchion. In Kerplak’s hands it is a 2d3+1 weapon, but when it criticals it has a chance to stun, damages Con and does +2d6 damage to those of Good alignment. But Kerplak seems happy with it. I look forward to making a gnome miniature with a chainsword strapped to the underside of his crossbow.

Halvard took a Cloak of Charisma, which is the kind of thing Our Lord In Iron shouldn’t be swayed by, but in game mechanics, that’s what happens. No one took the Breastplate, which is probably good because my finishing move fluff meant Halvard rent it verily in twain. The other thing was a +1 Cold Iron Returning Dagger. Tersplink got that maybe?

With the fog lifted and the way ahead apparently clear, the party moved on, scouring the area for more of the poem, a fragment of which Dagfinn had already found. Tersplink found some in a small square chamber and pointed it out to Dagfinn.

However, as this was going on, it began to dawn on Tersplink that all this time spent with these people had simply been building up to this point. He remembered every sideways glance any party member had even given him, every conversation that had ended abruptly when he entered a room… he realised that it was all a big conspiracy. All of it leading to this place. It became clear to him that at some point his party mates had been turned, converted into willing disciples of Lamashtu. He’d trusted them and they’d led him here, so that he could be sacrificed to their infernal mistress in a place holy to her. Struck by this horrific revelation, he abruptly disappeared from the room, having cast a spell that took him far from these monsters, his friends. If he’d been of a more violent disposition, he may have struck out at them, but fortunately, he isn’t.

The thing is, he wasn’t the only one affected like this…

Ben picked up the Compleat Adventurer for his act of story appropriate self-preservation, which was particularly apt since he isn’t going to be able to play for a while due to showbusiness.

2 Comments on “The Acts of the Lords of Rannick, XLV”