The Acts of the Lords of Rannick, XVII

Having dispatched Queen Rhoswen in no uncertain terms, the scattered party began to pull itself together.

Albedon gathered up a recovering Torgor and after a brief rest in a Tiny Hut spell, rejoined their fellows in the tower.

Corwin, stuck on a towertop and less than enthusiastic about Dagfinn’s plan to dangle him most of the way down the tower’s thorny side bent his mind to figuring out how to make the crystal disk in the middle of the floor descend into the room below. Turns out, he just had to say “Down” in elvish, which is good, because he can do that, being a half-elf.

Dagfinn and Corwin spent the next few minutes trying to get the disk to do other stuff, but it turns out Up and Down was pretty much all it did (if only they had said “Fire Rainbow Boomerang Torpedoes” in Elvish). In Rhoswen’s bedroom, (restroom really, Elves don’t sleep, don’t really need a bed, do they?), the pair looted everything, Corwin stuffing the Handy Haversack with all the decor that would fit. They were joined in time by the Raven-guided still-blind Kerplak; Badonk, who was uncursed by Dagfinn, Albedon and Torgor. Albedon shared Rhoswen’s items with the group, which Dagfinn identified as a +2 Headband of Alluring Charisma and a +2 Ring of Protection. 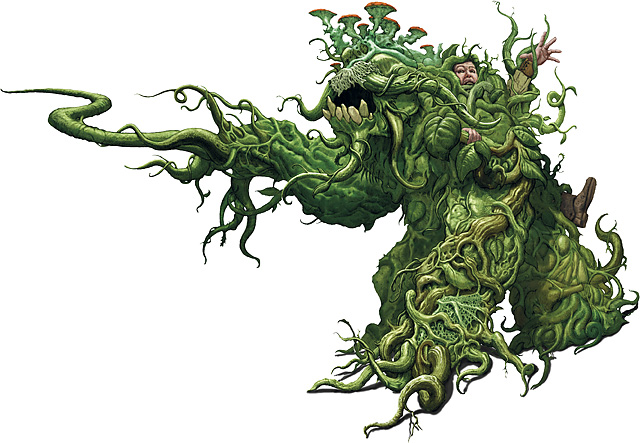 They proceeded downstairs to collect stoat-Lonny and then set out to explore the rest of the castle. They discovered an armoury; packed to the gills with weapons for spriggans but with a fair amount of magic and captured human-sized weapons. Amongst the haul: a +1 Short Sword, a +1 Mighty Cleaving Greataxe*,  a +1 Spell Storing Quarterstaff with Dispel Magic already stored in it (groans), a +1 Fey Bane Longsword (groans) and a +1 Light Crossbow.

They then stumbled across the only resident of the castle not to have fled in a panic. They were jumped on the rooftop by a Shambling Mound, who swatted ineffectually at Badonk and then pulped Albedon unconscious. Dagfinn found that his shocking bow accidentally made the Mound tougher and while Corwin poured some healing down Albedon’s neck, Badonk slew the creature.

Retracing their steps out of the castle once they were done searching it, they made their way to the site of their fight with Tenzekil. Faengard wall, now rebuilt, hummed with energy, the runes carved into the stones glowing brightly in the dark. They crossed the wall with ease, for the most part, although Albedon and Badonk took a jolt of energy when they crossed over. Dagfinn, in possession of the Crook of Cildhureen, found that it would not pass over the wall at all, so he had to leave it behind.

Crossing the Faengard, they found the faerie mound that they’d used to get into the fey realm and walked over it, back into Golarion, where it was night, but not Fellnight night.

In the dark they picked their way across a battlefield, where Rhoswen’s Spriggan forces had mauled the outnumbered Fey Conclave. However, the Conclave had held out long enough that they were able to counterattack during the panic caused by Rhoswen’s defeat and death and the creatures of the Fellnight were scattered. The tactical victory had taken a hard toll on the Fey and their camp was relatively somber as the various fey factions attended to their fallen.

Lonny and Arradin were freed from their polymorph and Kerplak’s blindness was cured. Lonny set to work helping lay the dead to rest, which was most appreciated by the gnomes.

Corwin talked a while with the druid Devarre. Devarre advocated attending to the townspeople of Whartle, to let them know what happened. On hearing of Rhoswen’s magic mirror, Devarre warned Corwin that the mirror would cease to exist if it was introduced into the second world and that it only held power within the fey realms. This reminded Corwin that Baaz’s mystical willow tree dojo is a pocket fey plane.

Dagfinn tried cheering the fey with songs of victory as well as taking it down a notch with a couple of heartfelt acoustic numbers on the nature of mourning. It seemed to go down fairly well.

One thing everybody had in common was exhaustion, so while the humans, dwarf and gnomes laid down for some well deserved sleep, Albedon and Arradin rested and watched the Fey silently strike camp and fade off into the forest as the dawn broke. When the sleepers woke the next morning only the graves marked the site of the camp at all.

Trekking back to Whartle, they found the town jubilant at their return and the lifting of the Spriggan’s siege. The town changed their various hauls of booty into coin and although they offered substantial discounts on some of their wares, there were no takers. Instead, the money was split and the party set off for home, wherever that might be, with the whole summer to fritter away their hard-earned rewards.

*The MCGreataxe, it was decided, should go to Arradin. Which makes a lot of sense, because reading what a mighty cleaving greataxe could do in her hands is kind of bonkers. Mighty Cleaving Greataxes: for when you absolutely, positively have to kill those three guys standing in a row.

The least she could do, (assuming she has +4 strength bonus.. she may actually have 5), is 6 points of damage. The most she could do on a single, non-power attacking hit is 17, but with Cleave and a Mighty Cleaving weapon she could hit three times at normal attack bonus, (1 original hit, one extra foe hit with Cleave and one extra foe with Mighty Cleaving) so she could put out 51 points of damage per round and still get her Move action. Which isn’t bad. The threat range is normally 20, x3 too, so I look forward to seeing a triple damage crit with a d12 weapon.

← The Acts of the Lords of Rannick, XVI
Not So Deep Thoughts →

One Comment on “The Acts of the Lords of Rannick, XVII”