The Acts of the Lords of Rannick XXIV

I think the travel from the Storval Stairs to the Valley of the Black Tower is the least interesting part of the journey. There is a chance you may run into Shoanti (they did, to no great effect) or a patrol of Stone Giants (they did and a great deal of blood was spilled). Wedged between the 25-round action in Sandpoint and the non-stop, rollercoaster fight ’til you drop, I should just go into combat rounds now extravaganza that is the Valley of the Black Tower… not that I’m giving anything away… there just isn’t anything to this part of the journey.

Anyway, I’ve been away from the computer all day, so I’m just catching up with what happened.

Splitting the party for X unstated reason, Torgor, Arradin, Tersplink and Don stayed behind at the Storval Stairs. Presumably so that the supremely untalented trackers of Corwyn, Dagfinn, Albedon and Kerplak could blaze their own special trail. And blaze they did.

First things first, they looted the lair of the Stone Giant picket that they’d killed last week. They got a bit of silver coin and some trinkets: a mithril anklet (I’m not calling it Mithral, I’m just not), a mammoth carved out of mammoth tusk and a rather nice gem studded gold crown. Nothing magical, but cha-ching.

After that, they set off under Corwyn’s direction. After a few hours, Corwyn handed the reins to Kerplak, I think, who didn’t do a whole lot better.

After a hard day of mostly walking around in circles they settled in for the night; selecting a seasonal riverbed as a campsite. The night passed without incident, Corwyn and Kerplak keeping watch.  In the morning, as Albedon was trying to commit his spells to memory and as Dagfinn was doing his morning Jazzercise, Corwin spotted something amiss to the north. That gave everyone a slight heads up before boulders crashed into their campsite, one of them beaning Albedon from afar – an insult that he would not let pass unreturned. Three Dire Bears charged the encampment, goaded on by two Stone Giants who were eager to see what the interlopers were.

Armed to the teeth, as it turns out. Kerplak criticalled the first Dire Bear with his Grenade Launcher full of mischief. Since it criticals on the magic list, there being no other way to explain the overload of arcane gasses and no opportunity, its critical turned out to be double damage as acid. The damage was more than enough to melt the front half off the raging bear.

Melted bears: Something of a specialty for Sean.

The other two bears swung into action, attacking Dagfinn, Kerplak and Corwin. As the stone giants neared, Albedon roasted them with a well placed Fireball spell, scorching Corwin’s dire bear too. He then followed up with a Wall of Fire and Scorching Ray, which helped drop another dire bear and one of the stone giants. As the remaining stone giant legged it away across the plain in the direction he’d come, Dagfinn, who had evaded the worst of a mauling by turning invisible and staying ahead of the sniffing bear dropped his Invisibility spell and attacked and Corwin stepped in to finish it off. Kerplak had scored a few sneak attacks, but was now reduced to using a gnome hammer as a critical fumble had left him unable to use ranged weapons. That was something of a problem, as he’d usually be the go to guy for picking off runners like the stone giant.

Up steps Albedon and the longbow he took from those lake pirates. At 220ft, an arrow whistles by the badly wounded giant, but at about 400ft out, Albedon sends one clean through the skull, toppling the giant.

This is Park Kyung-Mo. He is an Olympic Gold Medalist, shooting arrows 230ft. That guy doesn't have shit on Albedon.

Wounds are assessed and healed, talk briefly made about camping out to get their spells back. After collecting the rather nice furs that the giants wore, they pressed on. They were approached by a small band of Shoanti. The Shoanti were from the hawk clan, the Shiikirri-Quah.  The Shiikirri are some of the ‘friendliest’ of Shoanti and trade with the western towns of Varisia, including Ravenmoor and Riddleport. They are also excellent horsemen and horse-traders and after passing on some glum information about the Stone Giants they got down to horsetrading. The information sank in though (the jist of it did, anyway) so I’ll relay it now too:

The tribes of Stone Giants typically regulate their younger, more aggressive members with their older, wiser and respected tribal elders. They are not, by nature, warlike or cruel. However, the Shoanti know that an outcast called Mokmurian has been luring young stone giants from their tribes with promises of wealth and plunder. On some occasions, he has challenged the tribal elders, slaughtered them and then taking control of the tribe completely. This has caused all sorts of problems for the nomadic Shoanti as their typical routes have been disrupted by the giant’s increased and aggressive patrols. The only Elder that still exists around the Valley of the Black Tower is Conna, the sole Elder who advocated against exiling Mokmurian in his pre-outcast days. 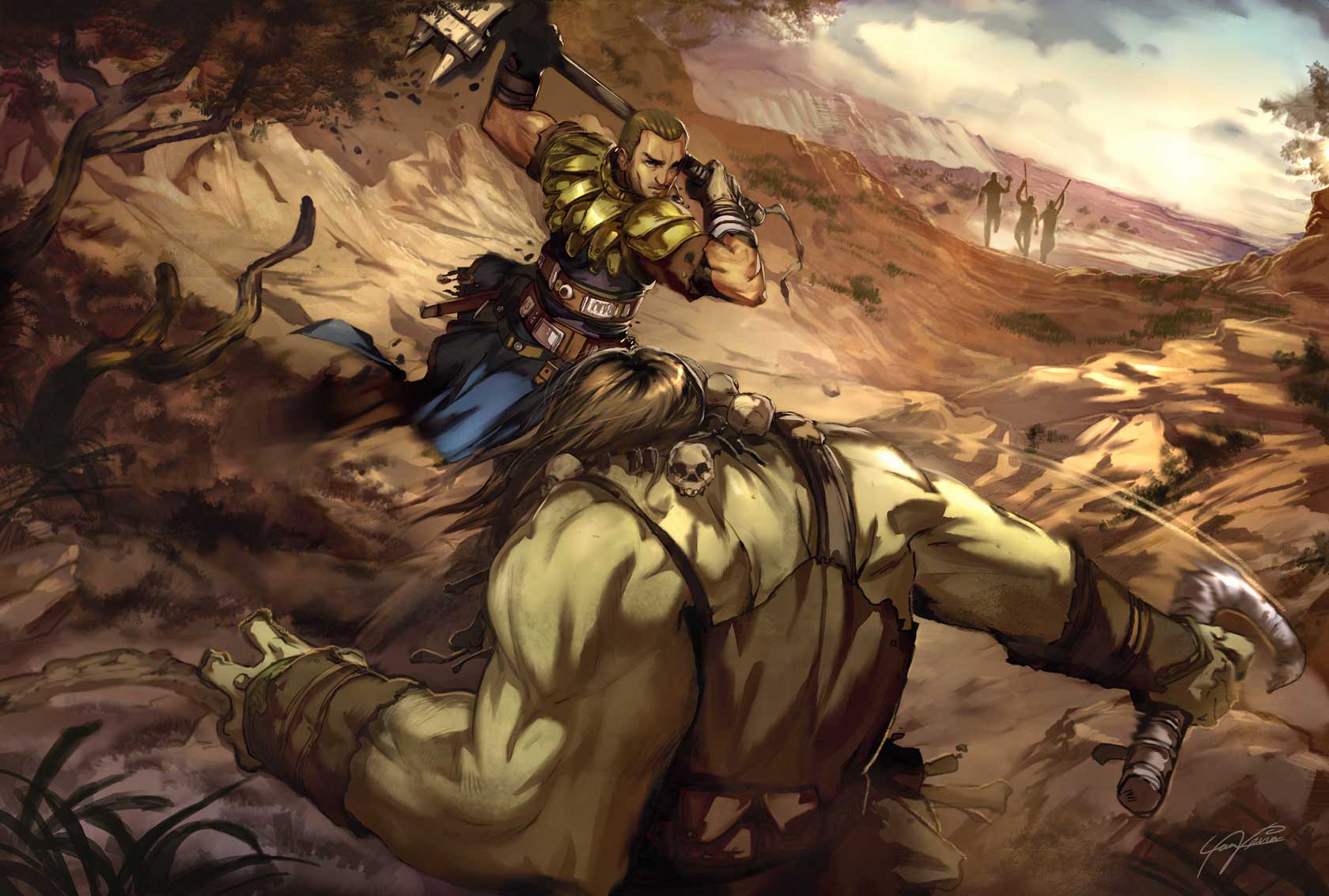 They also warned that there were flying things that patrolled the sky around the valley. Corwyn overpaid them for a horse, exchanging the furs he had retrieved from the giants and received a good quality Light warhorse in return. Dagfinn couldn’t bear the thought of anyone having something better than he, so he also wangled his way to a combat-trained light horse. I think Albedon picked up a decent back up too.

Survival rolls to make their way in the right direction were made, slightly better today and they dedicated the last few hours of the day to finding a nice hidden campsite amongst the foothills of the Iron Peaks. The campsite was so out of the way and so cozy that upon taking his watch, Corwyn completely fell asleep on watch. After six hours of sleep, Kerplak woke up and took his watch. If the spellcasters noticed that they got a lie in, they made no mention of it.

Setting off the next day, they moved through more arduous country and the change of mounts worked out well. Sometimes it was more effective to get off the horse and lead it. By afternoon, they had moved around the edge of a ridge and were suddenly presented with a view of the valley below.

The dead stone giant in Sandpoint said that Mokmurian had made his base in a place he called Jorgenfist, named after the stone giant’s name for the entrance to the afterlife, in the Valley of the Black Tower and you’d be hard pressed to imagine this wasn’t it.

Nah, nothing wrong with that tower.

The mouth of the valley was guarded by a large watchtower. It loomed over a pathway that led down to a stone fortification surrounded by giant and giant-kin encampments. Kerplak took a look at it through his spyglass and spotted a large spire in the middle of the fortified ring and three large buildings around the spire. The spire was shorter than the four stone towers that studded the walls. Taller still were a wide gatehouse and a tall blade-crenellated tower that looked much, much older than the rest of the fortification.

A quick plan was formulated and Dagfinn cast Invisibility Sphere on the party, then they ran at the speed of Dwarf legs to the watchtower. Percy was sent on a reconnaissance mission and reported back that there was a large lady on the upper floor and four big people sleeping downstairs. The watchtower itself would have been a five storey human building, but by the 18ft door, this didn’t appear to be very human-sized.

On the assumption that the large lady may have been Conna, the stone giant elder, Albedon and Corwyn Dimensioned Door’ed in to the second story. Before them stood a huge taiga giantess. Despite their polite approach, as soon as the giantess heard them she spun around and bellowed at them. No talk, only snoo-snoo.

One Comment on “The Acts of the Lords of Rannick XXIV”