The Acts of the Lords of Rannick, XXXIV

The other thing I did wrong last week was ruling that AoE spells killed Mirror Image image. They don’t. Mirror Image is a pretty great spell.  It can really buy a spellcaster some time.

Things hadn’t been going well for Halvard. Taken hostage during a Stone Giant raid, he had been hauled back to Jorgenfist and handed over to some kind of massive giant. There he’d been kept with a bunch of other humans, chained to monoliths in a dark, ancient vault. They’d whimpered and snivelled around him, but when you’re a cleric of Gorum, Our Lord in Iron, you probably don’t do much in the way of sympathetic reassurance.

At some point, the Lamia had arrived and after that, everything went kind of hazy. They stupefied him, charming and suggesting and commanding, making him behave like a docile pet for their amusement. He finally snapped out of it when the Lamia were distracted with other matters and found himself bound tightly to a blood-greased altar in a cave shrine of Lamashtu, Mother of Monsters. He had his impressive armour still on, which might seem odd for someone tied to a sacrificial altar. Lamashtu priestesses don’t just sacrifice you, you see. They make a small cut in your abdomen and introduce a fetal monster given as a gift from their patron, then they heal you back up, good as new. The monster burrows somewhere safe and out of the way and then grows, leeching strength from your body, until that isn’t enough any more and it starts devouring you from the inside. The priestesses keep healing you, good midwives that they are. Eventually though, the monster has too little room to maneuver and with one last frenzy of feeding, bursts out of what is now its host’s corpse in a horrific mockery of childbirth. That’s how you get sacrificed to Lamashtu. Letting that all happen within the suit of spiked metal armour that is the signature garb of another god? Delicious sacrilege.

"Hey guys, look I found one with a head still on it. That's lucky, right?" The development of banded mail came as a huge relief to medieval artists, who were sick of drawing fucking dots for chainmail.

So Halvard came to, atop the rough altar, the incense thick in the air and his erstwhile mistresses pre-occupied. He flexed, trying to get out of the rope bindings, but wasn’t able to, so cast Bull’s Strength on himself and gave it another shot. Eventually, he burst the ropes, gathered up his belongings which were mysteriously present and lumbered down the hallway.

There he found a elf woman, swinging wildly and erratically at one of the Lamia priestesses, and a terribly handsome Bard, singing a rousing tune about the fast approach of victory and waving a rapier around like a fondue-stick. The Lamia stepped back from these two, right into Halvard’s wheelhouse and began casting a spell. It was time to start chopping.

What had happened to that point began with our heroes picking themselves from their last dust-up. Healing was dispensed as Don and Torgor took Corwin’s largest ashes topside. As the conversation turned to the ever popular topics of “Where can we sleep now that I burned through all my spells in one fight?” and “How do I turn these skulls into sick shoulderpads?”, they noticed the smell of incense wafting down the corridor.

Suddenly, from thin air a melodious woman’s voice addressed them. Her tone was one of amusement. “These visitors must have come to make an offering,” she said, “to approach hallowed ground so boldly.” As they searched around for the speaker, they noticed that the end of the cave that the dragons had appeared from was… wrong, in some way. An illusion had been placed there to make it seem like an empty cave mouth. Kerplak shot a sunrod down the cave and the light stopped as soon as it hit the illusion. Busted, two Lamias appeared through the illusion. Half-woman, four-fifths panther would probably be the better way to describe them, since their torsos joined the body of a panther. A panther with a lady for a head, I guess is what they are.

You know that bit on a cat's neck that they can only just groom? I bet that drives these ladies fucking nuts.

Dagfinn and Arradin moved to engage them, while Albedon tried to set a Wall of Fire up between them. His spell was shut down by one of the Priestesses. Magic Duel! Kerplak started rattling off crossbow bolts.

One priestess leapt forward to engage Arradin and Dagfinn, reaching out to Arradin with an open hand, trying to drain her wisdom away.  Then she began lashing wildly with a flail and her razor sharp claws. Her flail did horrible damage, not that it did a ton of it, but what damage it did was horrible; extra profane damage. Dagfinn struck back, sickening her with a terrible shot to whatever the hell a half-woman/four-fifths panther passes off as a digestive tract. This was pretty much Dagfinn’s shining moment, he had pretty dreadful luck after that, but the Lamia weren’t doing much better.

The other priestess tried putting Arradin to sleep (ha!) then created an unholy blight, cured her sister’s wounds and then struck the Wisdom-drained Arradin blind. Perhaps because her wisdom was so lowered, this didn’t stop Arradin at all..

Frontline priestess moved over to one side and cast Sanctuary, which is a totally great spell because anyone trying to attack you has to overcome a Will save and people who like to go toe to toe in combat typically don’t have phenomenal Will saves. Dagfinn shadowed her at first, drinking cure potions while the priestess cured herself from the safety of her Sanctuary. Cure fight! Kerplak and Albedon both tried targetting her, only to be overcome by the Sanctuary. It was about this time that Tersplink showed up, rushing close-ish to the fray. He failed to Confusion anyone, because clerics are bosses at shaking that shit off, but he did deliver a timely Haste, which helped the melee party members considerably. 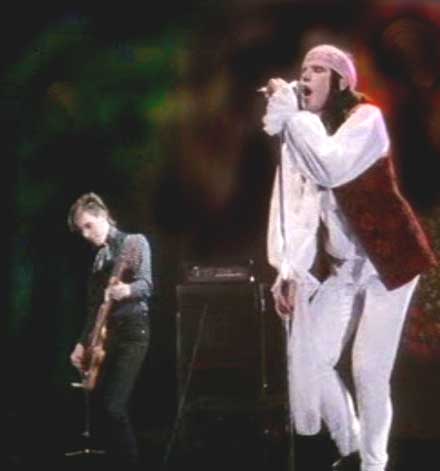 Everybody forgets that the song is called She Sells Sanctuary. Probably because Ian Astbury makes every word other than Sanctuary sound like it is being shouted down a drainpipe by a drunk. Nice blouse though, Ian. He looks like someone who raided a Dress Barn for a Steven Tyler outfit.

Arradin fumbled her way along the wall, waving her sword in the air but was in no way hindered by the Blindness, it seemed, lopping several fingers off of the spellcasting hand of the Lamia. She started laying some serious hurt down on the backline priestess and Dagfinn moved in too. .. and then their new friend showed up.

Reliably carving the priestess from behind with his greatsword, Halvard contributed to the flow of damage. The priestess was unable to get Sanctuary off, and her Cure Serious Wounds was paltry: the damage steadily mounted. Arradin sliced across something vital because the priestess died in a fountain of blood.

Frontline Priestess was expelled from her Sanctuary by Albedon’s wand of Dispel Magic. She charged forward to steal more Wisdom and then began spamming Channel Negative Energy. Kablam! Pretty vicious stuff. Kerplak and Arradin were both overcome by the bad vibes, but although she’d healed herself very efficiently, there was no way one Lamia could face so many opponents and she was cut down too.

Thus began the next round of “Where can we sleep now that I burned through all my spells in one fight?” and “How do I turn these skulls into sick shoulderpads?”. After a few introductions and some mild sermonizing by Halvard, it was established that he was not really the healing kind of priest. Nevertheless, he did what he could to get people back on their feet. Once Kerplak was back on his feet, he set about looting the bodies and must have made it look cool, because nobody had given a second thought to the bodies, but now descended on them with great speed to ensure Kerplak didn’t bugger off with all the good stuff. Greed is a great motivator, even if it is someone else’s.

On the bodies, they found two wicked looking and magical flails and two pendants that boosted a person’s Wisdom, which is good, because the heavily wisdom-drained party isn’t looking like a bunch of people I’d trust not to eat crayons at the moment. Speaking of which, Halvard was given possession of The Emerald Codex and used one of the scrolls to Restore Dagfinn. So that was nice.

We left them, no kidding, 30ft further down the hallway than we did last week. This is turning into the Somme. But the list of level inhabitants given by Conna is down to 3: one Jotunbood Giant and two trolls.

So that was that. Next week they’re going to have to find a way to carry on that doesn’t involve them finding a nice place to nap for about 18 hours. That Wand of Rope trick suddenly seems worth the money they refused to pay for it now, doesn’t it?

I tried a few more things with the Wacom tablet this time round. Some of them didn’t work: I realised it has been ages since I’ve been good at drawing perspective or anatomy, which is… kind of vital if you are going to draw a foxy elf fighter pulling a sword from a dragon’s head. So I’m not sure those work. Playing around with more layers is useful and I think I got the text bubbles looking a bit better. On a small scale, I’m not sure how much worth there is in shading and highlighting, but I’ve never been particularly good with colours. Anyway, that’s Arradin and Kerplak added to the mix.

← A long time ago…
Firestorm Armada →

7 Comments on “The Acts of the Lords of Rannick, XXXIV”