(Holy shit, The Escapist’s website has been dog turd today, so it has been tough to pull the quotes and links I wanted. Bear with me here as I ramble on unconstructively.)

Normally, the only Penny Arcade jokes I get without reading the blog entry are the dick jokes. Other than that, if they are commenting on some aspect of breaking gaming news, I don’t really get it because I get my breaking game news from Penny Arcade, not further up the stream. So I just fake laugh and nod knowingly and then go look up what the fuck they are talking about.

Not so with today‘s because I’ve been reading The Escapist’s series on the state of D&D 4, a series which appeared to be building towards the release of D&D 5. So I know what this one is about and appreciate the joke. Ha ha, ha ha ha ha ha ha! Drollllllll.

Reading the  The Escapist series by Greg Tito has been a lot like reading reviews of a movie that you were thinking about maybe seeing in the theatre, but didn’t and then you find out that it was awful. There’s an undercurrent of “Oh, why couldn’t that have been good?” but an overcurrent of “Thank Christ I didn’t waste my money on that!” cresting occasionally to a weak wave of smugness. Basically, how people other than me should feel about The Eagle.

I can’t really say much else about D&D4. Overbo was, apparently, not appalled by it. I have to remember that reading what people think of it on the internet is going to skew how good/bad it is. D&D5, it has been stated, will not do away with a set of rules that some people regarded as an abandonment of D&D’s core whatever. Rather it will add another layer of rules and build on D&D4. I’m more skeptical about this approach than I am about D&D4. You can add any spoiler you want to a Honda Civic, it’s still a Honda Civic.

In the discussion of the development of D&D4, there were some interesting insights offered as to why they went the way they did. One that caught my eye was this:

There is no lack of feedback on the web or at convention panels for what WotC is doing wrong, but Mearls said he is paying close attention. For example, statistics gathered internally show that more than two thirds of D&D players choose to play one of the four major races – human, elf, dwarf, halfling – so there’s been a shift to focus on the core of what people expect from the game. Mearls intended the Essentials line – essentially a repackaging of 4E rules into easier-to-digest books – to get back to the shared language that unites all D&D players. “You don’t want a situation where someone comes into a room and says ‘Hey guys, I’m playing a Shardmind Seeker’ and the response is ‘What the hell is that?'” he said. “I know what it is because I worked on it, but it’s not even in the Player’s Handbook. If you [publish] too much, that shared language, it just evaporates.”

The idea that we have a shared lexicon as gamers seems obvious and I can see why the rapid abandonment of that would alienate people. The risk of having the Open Game License so very Open is that you’ll have to define every game that you run by what it doesn’t encompass and that is a growing sea of stuff.  I didn’t like the deluge of Prestige Classes to D&D3, just as I’m wary of the increasing number of alternate character classes in Pathfinder. I’m pleased that no-one has taken one to date and I think it does acknowledge how much wiggle room there is in Cleric, Fighter, Rogue etc to create a fun character with a playable build, party role and personality. I’m not against Prestige Classes, necessarily, especially the setting specific ones that Paizo has put out – but their sense of not-belonging to the game makes me… not excited about them. The more Paizo puts out in terms of rule expansions (which is really what new classes are) the more I feel the onus is on us to decide which type of game we don’t want to play. Steampunk? Kung-Fu? Sexventures?

I like the touchstones. I like the Beholders and the Bags of Holding and the Red Dragons and the Color Sprays. These are like slipping on an old shirt, re-reading a beloved book. We’re all old enough now that playing a classic D&D style game is an exercise in comfort and nostalgia as much as it is Chinese food and witty dick jokes. This is no-one’s first trip around the dungeon and I think it is fun going around again. 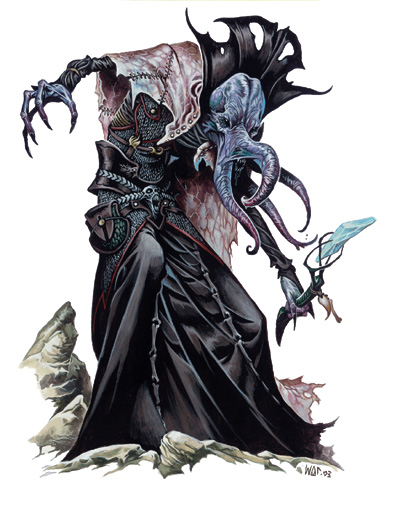 I miss these guys.

(This doddering old fogey attitude probably isn’t too removed from why I like the OGL: I’ve bought enough fucking rulebooks in my life. My money could go to lots of places these days, and I appreciate that they give me essentially everything I need for free.)

When someone tells me (and this has happened) that their character is a *insert non-traditional class or archetype here* we suddenly stopped having something to talk about, because I haven’t played that game, the one where that thing exists. Even though it shares the same name as a game I’ve played.

When someone tells me they play a Cleric, I can sympathise with them and say things like “Ah, it’s a thankless task, isn’t it?” and complain about the expectations players have of Clerics etc. It instantly means something to me and probably you too. The very first sentence of the first article in that Escapist series captures that:

Sitting around a table pretending to be human fighters and elven mages delving through dungeons in search of loot and fame hasn’t been a favorite pastime for fantasy fans for all that long.

We instantly know exactly the kind of thing Greg Tito is writing about. Other games have different approaches, but since it is a touchstone of RPGs it is nice to have D&D make sense to us.

I guess the point of this ramble is a) I’m glad I picked Pathfinder, b) I can see why people wanted to try something new after the incredibly rapid expansion of the game in the OGL-era, c) I don’t think it worked.

2 Comments on “The Other One”