If you’re like me you’ve seen millions of versions of Ticket to Ride sitting on game store shelves and though nothing of it. I became interested when I saw it on the Table Top blog. This weekend I got an opportunity to play Ticket to Ride Europe and now you have to read about it. If I could compare it to another game I’d say it’s Catan but you only care about making the longest road. 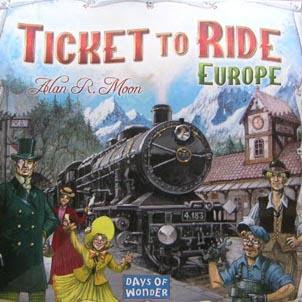 Each turn you can do one of three things draw a card, build a route or draw an objective card. The main cards are color/symbol* coded and used to build routes of corresponding color/symbol on the board. Routes give you points. Routes are marked by placing little train pieces on the board. The objective cards are opportunities to gain bonus points by completing specific routes (Paris to Vienna for instance). The harder the route the more points are awarded. If you don’t finish the route by the end of the game you lose points.

Players take runs drawing and building routes. You can only have one player on a given route so there is a certain amount of cock blocking strategy involved. The European version has a rule in it that the standard version does not where you can build rail stations that let players use other player’s routes with respect to completing objective cards. The game ends one round after any player is reduced to three train tokens or less.

This game was a hell of a lot of fun and really easy to pick up. I’m giving serious consideration to buying a copy.

*The Germans may have many faults but god bless the one who realized that symbols are easier to recognize than colors for people that are color blind.

3 Comments on “Ticket to Ride”