There was a lot of talk about Space Marine at D&D last weekend, and I did hardly anything besides playing the shit out of it all weekend, so I thought I’d write a blog post where I actually review it, in case you ponderin’. 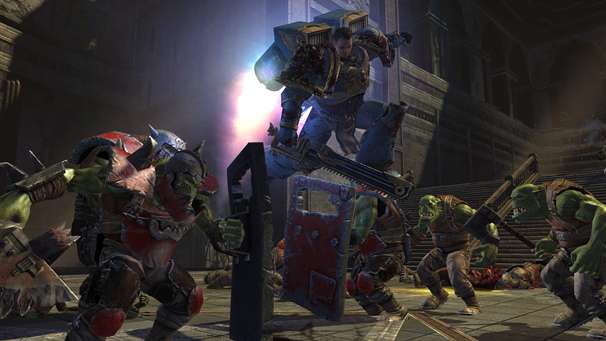 You see how awesome this is? Space Marine is this awesome the whole time you’re playing it.

I think everybody that’s going to has downloaded the trial and seen that Space Marine is pretty much a tighter-perspective version of God of War or any of the other billions of beat-em-ups that feature an unstoppable warrior, hordes of onrushing enemies, and a system of combat where you can either combo dudes to death or perform grisly finishing moves that send gouts of blood in every direction. I like those kind of games, and this one is very good. There isn’t a lot of variety in it, but it’s challenging and the pace of the game doesn’t allow you to just pick the combo that you think works best and hammer on it until the ending credits. You have to use all the weapons and all the Space Marine’s dodges, movement, and super powers or you’ll eventually get overrun and pounded into the ground.

What’s cool about that is that the variety of weapons comes from their tactical variety, rather than the “don’t shoot an ice gun and a frost giant” type of variety most games like this use. You develop favorite weapons based on how you like to confront the enemy, and the game actually upgrades the weapons you get early in the game so they’re more useful later. That means if you like the feel of the bolter you can kill guys with it at range and up close for the whole game. It’s rare that you’re forced into sniping if you don’t like it, but the game doesn’t prevent you from withdrawing a little bit to get some space to better wield an autocannon if that’s what you think is going to work. 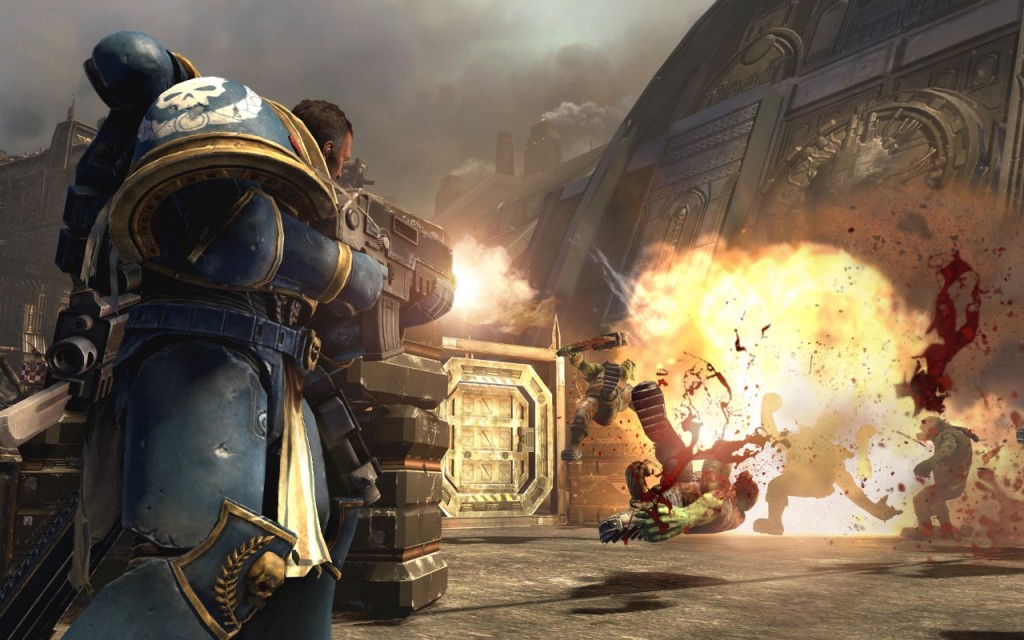 For example, boltguns blow up environmental hazards just fine, thanks.

That’s all you get for variety though. There’s no hiding behind cover, no being stealthy, and no running around fights or anything like that. If you see enemies you’re running into their midst and fighting them, whether that’s with a jump pack and a power axe or on foot with a storm bolter. It’s like that all game, and all that really changes is the number and variety of bad guys you’re chopping up.

The reason that’s not a problem is the reason the game is so great for so many of us, though. They really get the 40k right in this game… more so than almost any of the others like Dawn of War or the XBLA game Kill Team from earlier this summer. Partly that’s because these types of games can tell better stories than RTS games or $10 arcade diversions, but it’s also just a really fully realized piece of 40k fiction. The sense of scale in the environments is amazing, and the brutality of the universe is represented really well. There’s a point late in the game when you’re fighting your way across a bridge to meet up with a Thunderhawk while other Space Marines are landing around you. The chaos of it and how well it lives up to what I imagine in the minis game really took my breath away. I'm going to be seeing this in my dreams for a while. I'm more psyched about sleeping than I've been in years.

I started playing the multiplayer a little bit, and I don’t think there’s as much to love there as I was hoping for. There’s no co-op in the campaign mode, so that’s a bummer. Multiplayer consists of either take-and-hold or team deathmatch, and it uses the currently fashionable system of unlocking weapons and perks by playing and winning matches (e.g., you can’t use the Power Axe until you’re level 6, which took me an hour or so of playing to reach). It’s not bad if you like that kind of thing, but it can be an exercise in frustration if you end up playing with significantly better armed and armored players, since never being able to kill the opposition means you don’t advance and gain access to their fancy arms and armor as quickly. It’s pretty balanced and I like it okay, but I’ve seen it done better elsewhere and it doesn’t benefit as much from the richness of the source material since the only dialog you hear are the grunts of the dying and the breathing of slack-jawed videogamers into their headset mics.

I’m almost done playing through the single player (though I’ll probably go back through a couple levels just to re-experience some particularly nifty set pieces), and I’m probably going to keep at the multiplayer for a little bit to see what kind of depth the more advanced wargear adds to the experience. If anybody can wait another two weeks or so to play it and won’t want to try the online stuff, you can borrow my copy. I’m not sorry I spent full pop on it though. The single player campaign is completely awesome.